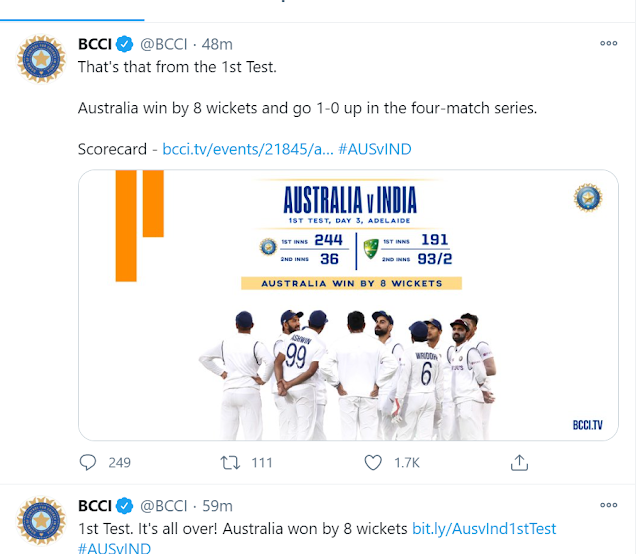 Captain Virat Kohli too has called for "not making a mountain out of a molehill."

The message is clear. Let's leave the defeat from the jaws of victory as an aberration and move on.

The BCCI and Kohli ought to be reminded that anything historic requires a new one to replace it. You'd want to tell them, this record may not be erased for another 50 years. Maybe, never.

Kohli was asked a specific question on the eve of the Test match about playing and coping with the Adelaide Test at odd hours. His response was:

"You have a fair idea of how you want to go about things but can't completely plan anything in Test cricket.

An Hindi language journalist whom the Indian team's media relations guy addresses as Sir had even reminded Kohli: "The Aussies are known to be good at breaking momentum. You'll need to play watchful cricket by the hour, ball by ball," he said, probably expecting Kohli to provide a headline grabbing reply.

Kohli nodded in affirmation and seconded the thought as if each member of his team was trained into this aspect and knew their professional role.

Fact is: India's thinktank didn't seem to have had a team huddle in their hotel or dressing room after their bowlers had reduced the Aussies to a 62-run first innings deficit.

In contrast, the Aussies are likely to have quickly gone back to the drawing board, narrowed down on the targeted approach their pace bowlers needed to take, then implemented the fuller length deliveries with precision.

The rest, BCCI and Kohli will have to live with against their names, is history.

on December 19, 2020
Email ThisBlogThis!Share to TwitterShare to FacebookShare to Pinterest