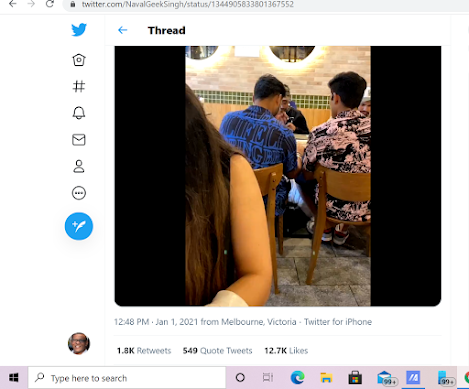 The culprit, whether he did this knowingly or unintentionally, is a self proclaimed geek who goes by the moniker GeekSingh.

While this news was trending, came the shocking update that Sourav Ganguly has been admitted to a hospital after complaining of chest pain. The word geek is a slang originally used to refer to an eccentric person. It's present day use and meaning has changed to describe one who is perceived to be overly intellectual, or socially awkward.
Choose whichever meaning you want to, but Mr GeekSingh, whose real name is Navaldeep Singh has put the Indian team and their Test prospect in an awkward state with his eccentricity. 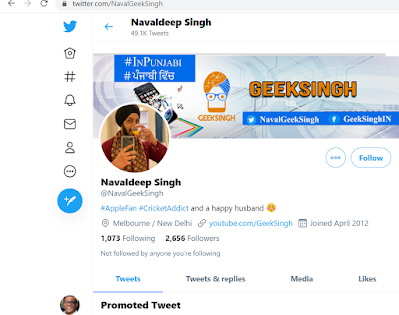 Wikipedia says the Etymology of the word Geek "comes from English dialect geek or geck (meaning a "fool" or "freak"; from Middle Low German Geck). Geck is a standard term in modern German and means "fool".

Singh, who claims to be an #AppleFan, #CricketAddict and a happy husband has received considerable support compared to the criticism he has received when he reportedly tweeted that Pant gave him a friendly hug.

He seem to have withdrawn that tweet and claim. He posted a clarification soon after saying: "Pant never hugged me it was all said in excitement we maintained social distance all thru:) Apologies for miscommunication @BCCI @CricketAus @dailytelegraph."

However, the video he has posted on his Twitter handle that clearly shows 'Hitman' Rohit, Prithvi Shaw, Navdeep Saini, Pant and Gill seated inside a restaurant has gone viral. Well almost! The video has received 12.9k likes, 1.9k retweets and counting.

So, clearly GeekSingh has gained from this popularity at the expense of Team India, at least until you see Rohit, Shubman and Rishabh take the field on January 7 in Sydney.

Meanwhile, Cricket Australia (CA) swung into action after the video came to their notice.

Apart from alerting the Board of Control for Cricket in India (BCCI) who have former India captain Sourav Ganguly as president, CA issued a public statement or media release.

Late Saturday, Ganguly was reported by Times Now to have suffered a heart attack. He was admitted to the Woodlands Hospital to have an angioplasty done.

Reputed news agency, Reuters, quoted CA saying: "The BCCI and CA are investigating the matter and seeking to determine whether the outing constitutes a breach of biosecurity protocols.

"In the interim, on the advice of the Australian and Indian medical teams, the aforementioned players have been placed in isolation as a precaution."

Is Australia Doing This Deliberately?

The CA has categorically stated that the isolation of the five players means: "This will include separating the group of players from the broader Indian and Australian squads when traveling and at the training venue."
The biosecurity protocol as per CA requires players not to dine inside restaurants. What this means is the furniture (chairs and table) inside the restaurant the five players are seen using, could have been previously occupied by diners involving local citizens who could potentially be carriers of the deadly Covid-19 virus.
As a result, there's risk of the players picking up strains of the virus and even if they look fit, could be asymptomatic carriers.
The bigger concern not yet revealed to the media and the public is: These five players practiced with their colleagues -- including captain Ajinkya Rahane -- the next day, on Saturday.

Times Now was among the first who broadcast the Indian cricket board's response on the matter.

It quoted sources within the board saying that the term 'investigation' used by Cricket Australia was very strong to be used in this scenario.
The source, as per Times Now, said the board will allow CA officials to check and confirm if the players indeed breached the biosecurity protocol.

According to information from this source, the players were not dining inside the restaurant as has been claimed.

They had ordered a takeaway and were waiting for their order as there was scattered rain in Melbourne during that period and they wouldn't want to risk getting wet and invite a cold, cough that may jeopardize their chance of playing in the 3rd Test.

News.com.au has reported that fan Navaldeep Singh's video posted on twitter has now registered more than 250,000 views. It also reported that the fan footed the players' restaurant bill of A$118.69
that converts into INR 6671.41 as per xe.com.

Sports website Cricketaddictor chose to highlight tweets from Indian cricket fans that discussed a beef and pork dish on the bill.

The beef dish, stir-fried beef with vegetables in black bean sauce is a popular dish eaten with rice in Southeast Asia, especially Thailand.
There's also steamed pork dumpling.
Pune Mirrior has reported that the five players were at the Chinese Noodle and BBQ Restaurant’ (at Chadstone Shopping Centre), Melbourne.

Cricket.com.au reported that "CA came down hard on Brisbane Heat after Chris Lynn and Dan Lawrence's biosecurity breaches earlier this season, fining the club $50,000 ($20,000 suspended) and each player $10,000 ($4,000 suspended)."
It also drew attention to "England paceman Jofra Archer's biosecurity breach in 2020, when he stopped at his house while the squad travelled between hotels, resulted in a one-Test ban."
The Economic Times quoted an unnamed BCCI official saying: "We can only term it as a malicious spin by a section of Australian media and this has started after their humiliating defeat."
He was referring to Australia's 8-wicket defeat to India at the MCG that has levelled this 4-Test Border - Gavaskar Trophy series 1-all.
The Cricket Australia website strangely did not have any word about the board's media release under the Media section of the site where you can see the latest announcements.