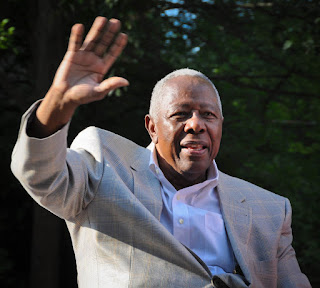 One of MLB's greatest allrounders, Aaron, according to The Guardian, had received the Covid-19 vaccine two and half weeks ago. He intended to inform Black Americans that the vaccine was safe.

The cause of the legend's death has not been reported except that he died peacefully in his sleep.
"We are absolutely devastated by the passing of our beloved Hank,"
the Daily Mail quoted Terry McGuirk saying. McGuirk is the chairman of the Atlanta Braves where Aaron spent 19 years.

Fans hoped the MLB had recognized the Negro Leagues while Hall of Famer Aaron was alive. That would have taken his MLB career games higher than the 3,298 in his name.
Only Pete "Charlie Hustle" Rose (3, 562) and Carl Yastrzemski (3,308) have played more games than Aaron.

Luton Shelton, 35, who played for Sheffield United and was Jamaica's (Reggae Boyz) all time top scorer died on Friday.

The star was battling Amyotrophic lateral sclerosis or ALS. The condition is also known as Lou Gehrig's disease, named after the baseball player who was diagnosed with it.

The condolences of all at the Blades are with Luton’s family at this difficult time. pic.twitter.com/3vJQwfZyl6 According to Mayo Clinic, ALS is "a progressive nervous system disease that affects nerve cells in the brain and spinal cord, causing loss of muscle control."

It isn't clear exactly whether Shelton was first diagnosed with ALS in 2017 or 2018. Sportsmax reported that his diagnosis was revealed in 2018, 19 months after he had played for his home team, Harbour View, in a Jamaica Premier League match against Tivoli Gardens in February 2017. This was his last club match.

The Caribbean National Weekly said that in 2017 Shelton "had lost a significant amount of muscle mass and his speech as a result of the disease."

CNW also quoted Shelton's father, Luton Shelton Sr revealing during an interview sometime in 2018 that his son realized something was wrong after getting injured in that 2017 match against Tivoli Gardens. Luton Shelton Sr passed away two years ago. Shelton who played 75 matches for Jamaica continues to be their top scorer with 35 goals. He is survived by his wife Bobbette and three children.

He also played in three CONCACAF Gold Cups. As per Jamaica Gleaner, the other clubs Shelton played for include: Helsingsborg in Sweden, Vålerenga and AaB in Norway and Demark respectively, Karabükspor in Turkey, and the now defunct Russian side Volga Nizhny Novgorod.

Shelton, Examiner Live says, was signed by Neil Warnock and arrived at Bramall Lane in January 2007. He could only make his debut in March in a 1-0 loss at Bolton. He scored four times in his red and white shirt from 25 appearances for the club.
Billy "I am that fat lad from Sheffield" Sharp expressed his grief with a tweet: "another former teammate to be taken too soon. RIP Luton Shelton." Into its fourth season, French television series Call My Agent!, Dix pour cent in French, is raging in the UK and Ireland.

According to the BBC's Arts Editor, Will Gompertz: "The exquisitely crafted, beautifully written, brilliantly acted French comedy-drama series about life in a Parisian talent agency is close to perfection, unlike its protagonists who are marvellously flawed."

Apart from Call My Agent! other French TV shows such as mystery thriller web series Lupin and Inhumane Resources, a drama featuring former Leeds / Manchester United star Eric Cantona have got Britain hooked on. All these television series have launched on Netflix.

Daily Mail says that "The rise of must-watch French TV shows has prompted some industry insiders to declare it the 'new Nordic Noir', a genre that found global success with series like The Bridge, The Killing and Borgen."

Call My Agent! is about four agents and the behind the scenes world of celebrity.  The tv series also has a cameo from Hollywood's Alien and Avatar star Sigourney Weaver.

At 71, Weaver is reported to have said yes to doing the show without reading the script. She is fluent though in French. Other Hollywood actors roped by the makers of Call My Agent! include Isabelle Huppert, Monica Bellucci and Juliette Binoche, as well as Oscar winner Jean Dujardin.