Cricket is keeping up with the viral media and trends.
There was no play on June 18, Friday, the opening day of the inaugural World Test Championship in Southampton, England.
It poured and former England captain Michael Vaughan grabbed his social media moments of fame. He tweeted:

I see India have been saved by the weather …. 😜 #WorldTestChampionship

His typical British way of rubbing-it-in, punny tweet riled many young Indians although a large number of India's youth, men and women, are taking up stand-up comedy as a hobby and profession.

Meanwhile, the viral media got to work with legend Sunil Gavaskar.

"His legacy was to tell the aspiring Indian cricketer to believe in himself."

India's legendary opening batsman and former captain unravelled another of his eye-ball grabbing quotes saying: "As a captain, when I used to be confused between playing a spinner or an extra batsman, I used to see the opposition's eleven and scratch and change the team on my paper just before the toss."
Gavaskar said this to Aaj Tak on the prospect of making a last minute change to the Test team, considering the playing XI India announced for the WTC Final has two spinners when the wet, rainy weather at the Hampshire Bowl indicate the condition suits pace bowlers.
The debate has picked up speed as Gavaskar advocates including an additional batsman, Hanuma Vihari at the cost of a spinner.
Former South African pace ace, Dale Steyn, is rooting for India to include an additional pace bowler.
You are not sure what do Virat Kohli and Ravi Shastri have in mind.
However, there's a response from their camp from an unlikely source. And it's bold.
Crictacker has India's fielding coach R Sridhar saying: "The eleven that has been announced is eleven that takes conditions out of the equation. I think it’s the eleven which can play and perform on any given surface and any given weather conditions."

As an ardent Team India fan, you are delighted to hear such confident words.
Will Kohli and his men be able to translate them into success?
For this, you need to watch the WTCFinal promotional clips that are on with broadcaster HotStar.
One of the clips has India's current middle batting sensation and wicketkeeper Rishabh Pant saying: "We win as a team and lose as a team."

Why is Hotstar showing 0/0 for India? Even before the toss. Do they know something we don't. 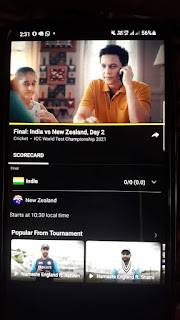 He was spot on. You are made to understand that television and mobile cricket broadcast has a 5-minute lag from the real-time action.
This time, HotStar seemed to be ahead of the toss. India indeed have been put into bat first by Kane Williamson, who has won the toss.
Are you wondering what did Team India players do during the opening day that was washed out by rain?
They played darts, table tennis and monodeal cards.

You don't need to know who played whom and who won. Correct?
You though can follow your cricket stars this season and play these games. If you don't have them, order here:
on June 19, 2021 No comments:
Email ThisBlogThis!Share to TwitterShare to FacebookShare to Pinterest
Newer Posts Older Posts Home
Subscribe to: Posts (Atom)