Here's the Round of 16 draw and schedule.

The Azzuri face a tricky Austria in their Round of 16 clash.

Roberto Mancini's XI did not face tough opponents in the group matches.

You may say the Italians were tested by Wales before winning 1-0 in their group encounter.

True, but they had rested eight of their regulars for that final group match.

The fact is, Italy have got into the Round of 16 winning all three group matches.

They haven't conceded a goal in their previous 10 matches and are on a 30-match unbeaten spree.

That's not all.
Italy have defeated Austria in all of their 13 previous meetings since 1962, including four defeats at FIFA World Cup matches.

The second match to begin the Round of 16 puts Denmark as firm favourite against Wales, the 2016 semifinalists.

Although the Welsh have won four of their previous 10 games against the Danes, they have lost all three of their last three competitive faceoffs since June 1999.

If you believe in jinx, then Wales have lost both of their last previous matches at Amsterdam, venue where they'll take on Denmark in the Round of 16.

This match will be played at the Johan Cruyff Arena.

So, whom do you predict to move to the quarterfinals from these four teams? Your Welcome Bonus is waiting for you at Betway!

Uefa has started a Knockout Predictor game that you can sign up to and even save your choice here. 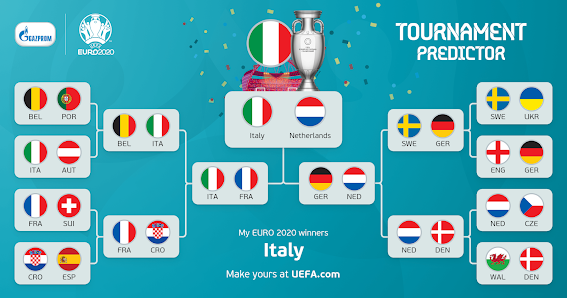 What are experts and media predicting?

The official Uefa website has put Wales and Denmark in with an equal chance to win this Round of 16 match.

Uefa too, however, does not see any hiccup for Italy to go past Austria into the quarterfinals. See: UEFA EURO 2020 daily preview: What to look out for on Saturday

It add that if not for keeper Danny Ward, the Dragons would have suffered heavier defeats in the group games.
Bleacher Report predicts Denmark the winner of the two.
It also says that the Azzurri are the heaviest tournament favourites going into the Round of 16.
Mancini's men go into the match with a commanding defence and an unblemished winning streak.
So, Austria despite the return of Marko Arnautovic after a one-match suspension will be no match for Italy. See: Euro 2020: Predictions for the Knockout Phase
The UK's The Telegraph has predicted Denmark to bow out at the semifinal stage.
The publication feels Wales have Gareth Bale, Aaron Ramsey and Euro 2016 veterans to stymie the Danes. However, it quotes the Welsh manager Robert Page saying: "they will have to be at their counter-attacking best.". See: Euro 2020 knockout stage predictions: England to reach final as dark horses Denmark make deep run

Fantasy Football Scout UK ran an extensive quote-based article that has interim manager Rob Page admitting that he is under no illusion about the challenge Wales is going to face against Denmark.

Both, the publication and Page did not commit to predicting the winner of this Wales v Denmark match.

Fantasy Football has quoted Mancini saying "A different tournament kicks off now. If the lads continue like this, then I could not ask for more." See: EURO 2020 injury updates and team news ahead of the round of 16

How are you strategizing your bet?

You can create your own bet for each #EURO2020 match using our Bet Builder.

Will you be focusing on locking in your bet for the 90 minutes of each game?

Will you be focusing on extra time, overtime and penalties as this is a knockout stage?

Well, as the tweet from Betway says: "You can now create your own bet for each #Euro2020 match using our Bet Builder."

OurDailyMuse
Hi, welcome to OurDailyMuse. This site's endeavor is to produce niche writeups that you may like, benefit from and want to share among your network. Thank you for visiting. Contact: ourdailymusing@gmail.com