I’ve come off as overly negative lately so I want to say: they tested two different endings for HALLOWEEN ENDS. One of them scored highly and by all accounts the Michael vs. Laurie confrontation is handled very well.

A few notable tweets aside, most of you may be asking, "Halloween Ends? How?"

Director David Gordon Green, who's dedicating this 13th film in the 45-year-old franchise as a love letter to franchise creator John Carpenter, says Halloween Ends will be very different from Halloween Kills.

Fans of this epic horror movie franchise in history are abuzz on Twitter, Reddit, and various other social media platforms on the outcome of the final showdown between Laurie Strode and the masked slayer Michael Myers.

Jamie Lee Curtis, who'll be bidding farewell to her role as Laurie Strode wrote: "ENDINGS ARE A BITCH" on her personal Instagram post. It's likely a bittersweet ending for her in Halloween movies.

Curtis is also listed as the executive producer of this final installment of Green's trilogy from 2018's Halloween and 2021's Halloween Kills.

According to AV Club that's done a synopsis of this movie, "this one is about the trauma that Laurie’s lived with all her life. By killing Michael, she can put the past behind her because killing Michael is the only surefire way to get that guy off your back."

Will Halloween Ends be aired on PeacockTV (the streaming service from NBCUniversal) the same time it hits the theaters? Newsweek says there's no reference to Peacock in the movie's trailer.
This, Newsweek suggests, the movie will have a Peacock release 45 days after the film is released in theaters on October 14th.
"This should mean that the film should be streaming on Tuesday, November 29 (though they may save it to release on a Friday, which is December 2)." wrote Newsweek.

UNITED STATES   Sprucing up your home at a comfortable price has got easier! Click on pic and Save $60 for 3 Piece Outdoor Sofa Set with code: Save60 👆 Getting the right furniture pieces that look good for the price compared to others can be tough. You want to invest in furniture that is exactly what you want and how you imagined it'll look. You also desire them to be comparatively cheaper and have excellent quality. And if you are ordering them online, you are concerned about the satisfactory packaging and shipment for the $ you spend. The Alphamarts is on a mission to satisfy you with all things home, patio and more, all in one place at affordable options. Your BIGGEST BENEFITS apart from great quality and an amazing deal on price are: free shipping for all orders, friendly and expert customer satisfaction team that's on hand 7 days a week and secure processing of your payment information. If you have your eye on clearance, they have it here: Up to 40% o 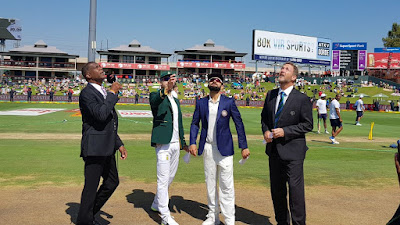 Virat Kohli, Jasprit Bumrah and Ian Chappell have made bold statements. Faf Du Plessis has been quietly confident. Who will pass this test? By Francis Adams As news of South Africa winning the toss and deciding to bat first has poured in, Virat Kohli's Team Virat Kohli and Faf du Plessis at the Toss. Pic courtesy: @BCCI India are seeking a victory, and in the captain's words "The most important thing is that we don't give up." The Supersport Park in Centurion, venue for the second of the three-match Test series, is 4000 feet above sea level. Such places are called high ground. It is here that India, who have never won a series in South Africa, are aiming to bounce back after the low in Newlands, Cape Town. Will they be able to? You, the eternally optimistic Indian cricket fan will confidently say, "Yes, this Indian team have it in them to win, if they play Ajinkya Rahane and KL Rahul." However, reality bites big. Virendra Sehwag has gi